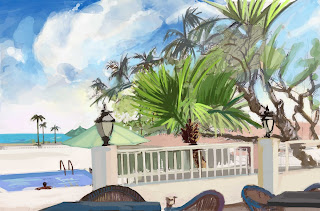 I just got back from Florida... greeted by a cold, humid and rainy week in New Jersey. While I was in Florida, though, I did a sketch. After a soothing swim in 82 degree water in the Ocean, and a gorgeous 88 degree day, I sat at an outdoor hotel dining area and drew the sea, the palm trees, and the view. I ordered a cobb salad, with chopped turkey, iceberg lettuce, avocado, sliced hard boiled egg, and chips of crispy bacon... A blue cheese dressing, and crumbs of blue cheese.

I sat there, with a pot of the most delicious coffee, and kept refilling my cup. What an amazing day, and just me. Perfect weather, and a quiet wind moving the branches of the palm trees before me.

My trip in Florida was to be a service to my grandparents, staying with my 95 year old grandfather as my grandmother went on a trip of her own. During the day a nurse came, allowing me the opportunity to get out of the apartment for a few hours. My grandma has taught me that we need to enjoy ourselves so that we can meet the challenges in our lives with a clear and positive attitude.

And so, I drove my grandma's Lincoln town car, cream leather interior and pale sea foam green body, listening to Frank Sinatra singing Dindi, the Girl from Ipanema, and other soft brazilian music from the songbooks of Antonio Carlos Jobim. Needless to say, I drove slow, and in wonderment that this type of experience is real. I pinch myself of course when I go to park that boat...

I return to the apartment, and imagine being 95, reduced to sleeping most of the day, and unable to walk more than a couple laps around the living room. However, my grandfather is all there. 95, and he can still remember the name of the theatre where he first took my grandmother to see a play, when they used to go out on the town. We drink scotch, and sit and talk about our family, my future plans, and my grandma. They have been married for 63 years, and when my grandmother returned from her trip, my grandfather smiled widely, hugged her, and told her how much he missed her. 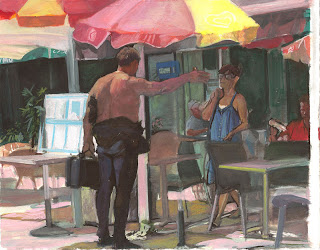 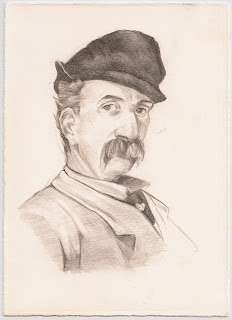 This man organized the traffic systems in florence. 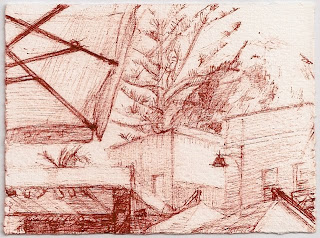 Cafe del Moro, San Vito Lo Capo. After a delicious cafe latte I tried to draw the Mountain through the Pine tree, which is the iconic land formation in the area. That, and the beautiful beach. 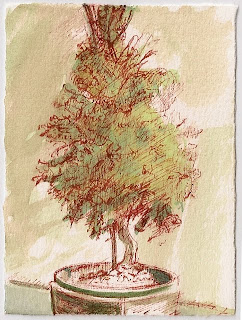 Potted Pine: Erice, Sicily. Another Cafe drawing. This time with an overpriced beer at a tourist trap. I'm from Pinecliff Lake, forgive me if I like little pine trees. 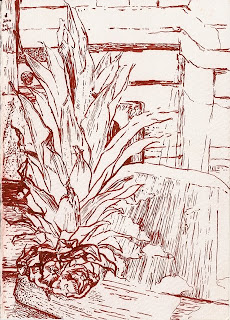 I drew this pineapple head while on a sailboat. I think pineapples are strange looking fruits. 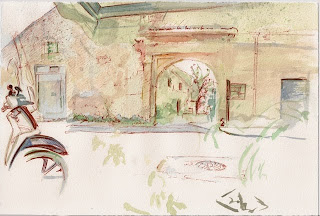 My Vespa in the corner outside Cafe Zi, in Marsala Sicily. While finishing the drawing, this little Sicilian kid sat next to me and watched. My Italian is decent enough that I can carry a conversation. He'd never been to America, and he was very curious what I was painting. Truth is, I just had a delicious Zi Cafe, and I wanted to sit for a while and paint. It didn't matter what was in front of me, but I was happy to get my bike in the picture. It's a Honda, 125cc Liberty moped. It could hold an hour's worth of gas, and I would shut it off on the tops of mountains and coast, because I never knew when the next station would come up.
Also, check out http://www.italmotorent.com . If you ever go to Sicily, Antonino from Italia moto rent will help you out. He's the man. 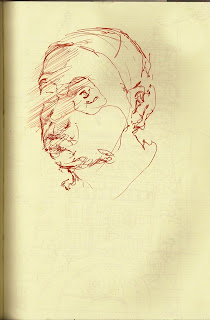 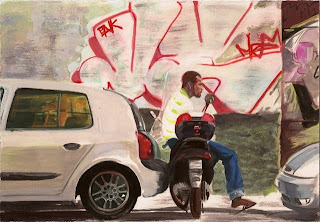 Outside an Internet cafe on Via Guelfa. I rented an apartment around the corner, and this internet point was my homestead for keeping in touch with family and friends. While writing an email I turned to the left and saw this guy suspended in a thought with the graffiti tag behind him. I snapped a photo, and worked up the image in gouache paint. 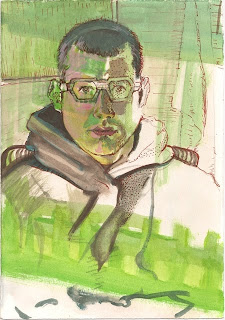 Self Portrait with Handmade Glasses. 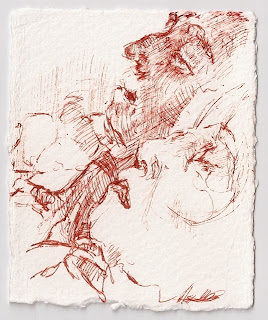 German couple on a plane to London. Up close and personal, maybe a little creepy, but I couldn't get over the shape of the woman's nose and her husband's white mustache. 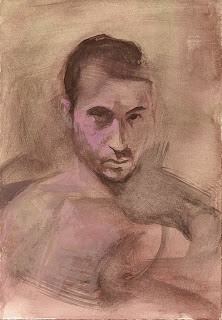 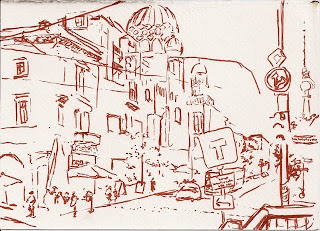 In the district of Mitte - Berlin. 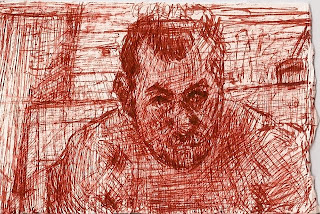 Done after spending a day touring the city of Berlin.. Woke up in the middle of the night, it can be a haunting place. 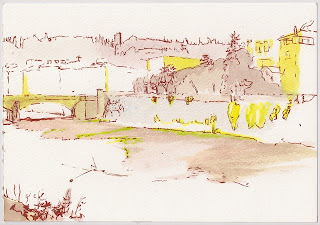 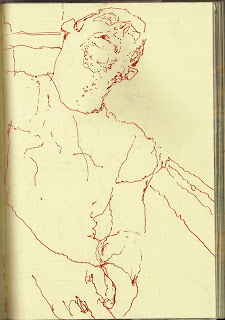 My friend Alban, sleeping on the last bus back to Sesto Fiorentino. 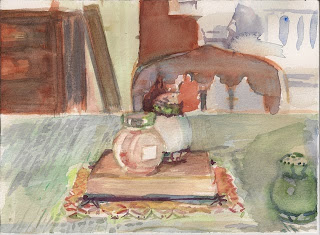 Farmhouse table top. It was like musical chairs, but with salt and pepper shakers as people would sit down use the shakers and try to rearrange them the way they found them so I could continue painting.
Posted by Adam Schechter at 10:28 PM